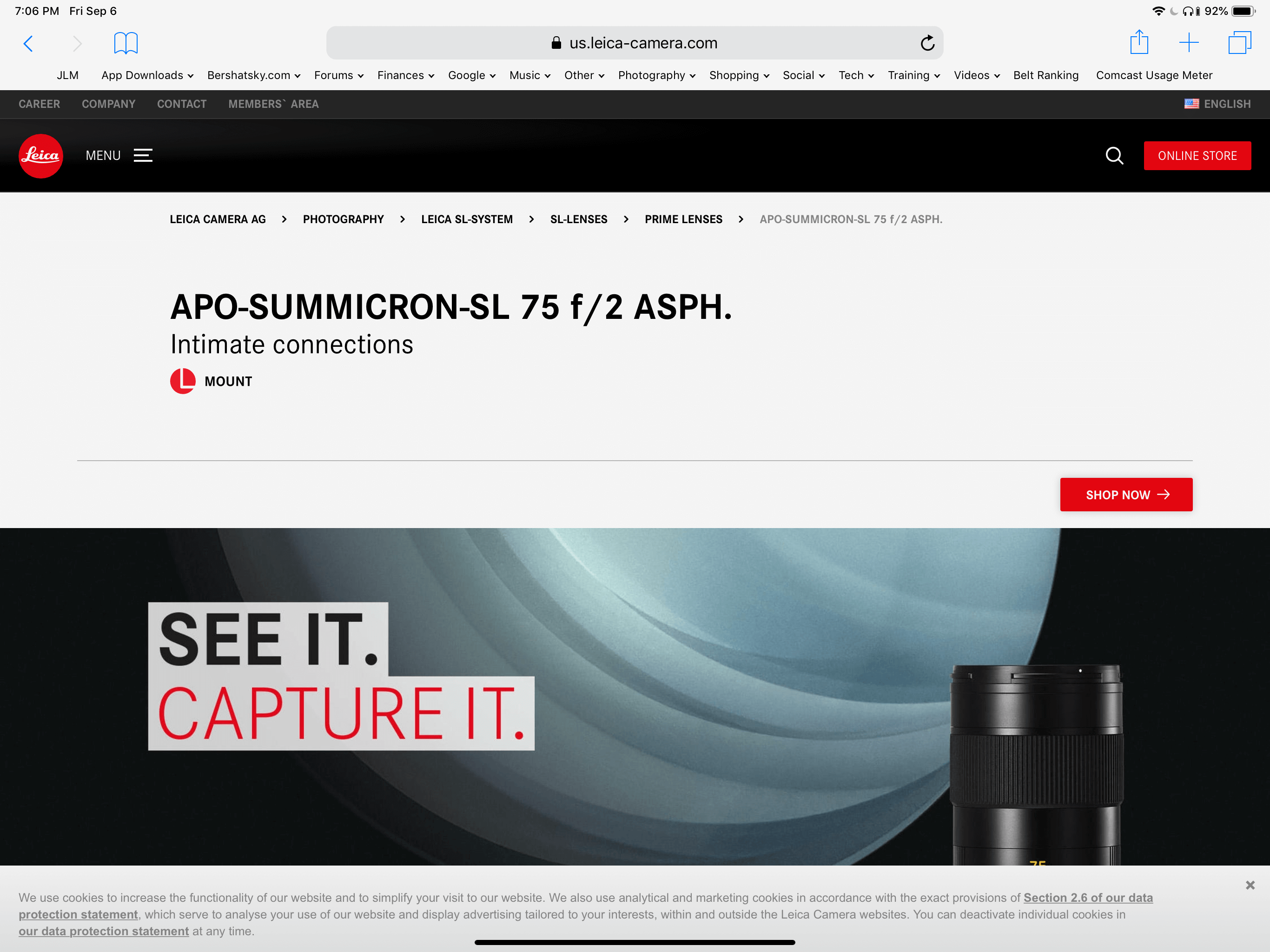 Previously, I owned a 75mm Summicron that I purchased used from Ken Hansen (deceased). I got a good deal on it, and really enjoyed using that lens. You can see my articles about that lens here. I also really enjoyed the 75mm focal length. It’s much more natural for portraits than 85mm, and it seems like only Leica and Voigtlander (not in the same Summicron class) make 75mm primes.

Now that I’m shooting with the Panasonic S1R, it can use native Leica SL lenses, and the 75mm Summicron is calling to me. The problem is, it costs $4,750 new! Now, I could buy it. However, I’d have to sell quite a bit of other gear that I use and enjoy to afford it. I supposed I could free up cash another way. Neither option seems appealing to me. It has me wondering, is the Leica really worth it? Would I miss the other gear if I sold it? How awesome would those images from the 75mm be? Is there really that much of a difference between 75mm and 85mm? How awesome is that Leica look at f/2 vs other high end 85mm lenses?

Let’s put $4,750 into perspective. For about $300 more, you could buy a new Sony a7R III (still a great camera) and a 70-200mm f/2.8 GM lens. I previously used that exact combo for a senior portrait session. I’d argue that a 70-200mm f/2.8 lens is a more versatile lens and a greater portrait lens at 200mm at f/2.8 than a 75mm at f/2. Also, the Sony will focus better with their real time eye autofocus algorithms and phase detection than the S1R. Albeit, the Sony isn’t as enjoyable to use, and the combo is much heavier, but still it puts price of the Leica into question.

What else could you buy for high end portraits with the same $4750? You could go buy a new 85mm f/1.4 GM for Sony with money to spare. You could go buy a Canon 85mm f/1.2 AND a 28-70mm f/2 lens for their newest RF systems. Granted, for both Canon lenses it’ll be a few hundred more, but since we’re already talking thousands – we might as well go for broke! You could buy a Nikon D850 and a Nikon 85mm f/1.4G. You could buy a Fuji system and a bevy of primes and zooms for that much dinero!

Previously, when I owned my Leica setup for a year, I really enjoyed shooting with it. Let’s be real though, Leica cameras are a retro design with inferior sensor technology and inferior features compared to many modern cameras of today. The lenses are indeed great for their size, and using a rangefinder is a really unique experience. Unfortunately, no other manufacturer can offer that experience or feel – which is just a shame. You pay a premium for the outdated rangefinder experience, but if you want it, you’ll pay for it. What’s the profit margin for Leica on every M10 they sell?

Another way to look at this is that my iPhone XS Max keeps perfect time due to internet synchronization. It has email, apps, iMessage, and more. I would argue it’s one of the best timepieces available – ever. Now let’s compare that to a Rolex. Both tell time. Which is better? For me? I’ll take the iPhone. Why? Better value and more functionality.

Here’s one more analogy. I drive a 2004 Nissan Sentra Spec V – a pretty cool car for Nissan Sentras. It was top of the line back in the day. Now it has about 80,000 miles on it. I drive it to and from work, around town, and to karate. Recently, my insurance agent told me not to even insure it (I still have PIP, collission, underinsured motorist, etc.) in case it gets damaged due to the book value being so low. Let’s compare my Nissan to a new Bugatti La Voiture Noire worth $19 million dollars. Being that I drive through a school zone with speed bumps to and from work, which car is better? Well, since I don’t have $19 million burning a hole in my pocket – I’ll stick with my Nissan.

Let’s assume the Leica 75mm f/2 has the best micro contrast of any portrait lens – ever. Let’s assume you can tell the images from that lens apart from any other lens on the planet. Is it still worth the cost? Maybe, but I just can’t bring myself to parting with a tong of gear to obtain one, and I don’t want to pay that much cash for it.

I’m fortunate in the sense that I’m able to shoot with multiple systems, one of them is a Nikon Z6. Nikon just released their new 85mm f/1.8 S lens – early reviewers say it’s quite a nice lens. Just yesterday, I bought one of these lenses from a camera shop – Kenmore Camera. They were nice enough to get it in the mail late yestreday, and I received it today. Photos will be coming tomorrow. The price of that Nikon lens is 1/6 the cost of the Leica 75mm f/2 lens. So here’s the question, is the Leica 75mm f/2 SL Summicron 600% better than the new Nikon 85mm f/1.8 which has a faster aperture? I’ll bet the Leica is a better lens, probably built to a higher standard, probably more durable, but is it six times as good? Can I make up for the difference in contrast with a few tweaks in Lightroom? Will anyone really notice? Which camera will focus better?

Well, I guess I won’t find out anytime soon which is better. Maybe in a few years, if the price of the Leica lenses come down, or maybe I’ll be able to purchase a good used copy. Until then, I guess I’ll have to use the Nikon 85mm f/1.8 S lens and other lenses that I’m able to keep because I’m not buying the Leica.